My work has been consistently influenced by nature. I was born in the Upper Peninsula of Michigan surrounded by lakes and trees. I developed my love for drawing nature as an undergraduate at Kendall College of Art and Design. My passion for drawing plants evolved into reproducing plants from botanical texts while pursuing my graduate degree at the University of Cincinnati. Drawing turned to the print medium as I began using photocopies to create plant arrangements that suggested structures that referred to architecture and anatomy: arches, ribs, wings, and hair as examples. These arrangements were then printed onto acetate and layered to create dimensional light boxes.

My recent works explore humans using advancements in science to grow plants more efficiently. Many of these art works explore the book Spraying Crops by Clarence M. Weed, copyright 1891. It was written when pesticides were beginning to be explored and used on a larger scale and reads as a manual for their use. Farmers were trying to solve the problems of growing food for themselves and their communities while making a living. Losing a season’s crops due to pests and disease meant the farmer had lost his livelihood for the season. Spraying pests with poison and treating crops for disease with chemicals seemed like the perfect solution.

Top 5 GMO Crops illustrates HT and Bt crops grown in the United States. Science has developed HT crops that are genetically modified to be herbicide tolerant. HT crops were developed to survive application of specific herbicides, such as Roundup™, a neonicotinoid that previously would have destroyed the crop along with the targeted weeds. Genetically modified insect-resistant crops containing the gene from the soil bacterium Bt (Bacillus thuringiensis) have been available for corn and cotton since 1996. After only six years the pests they are meant to control began developing resistance and are no longer damaged by the Bt gene. 80 to 90 percent of Corn, Soy, Cotton, Canola and Sugar Beets grown in the United States contain the HT and/or Bt gene. Growing one crop alone and using sprays has only increased the chances of crop loss due to insects, as insects continue to develop resistance to the stronger and stronger poisons. Monoculture as a farming practice destroys the biodiversity of the environment and disrupts the ecological balance that has been developing for millions of years.

Weed Free Yard Work and The Perfect Flower are collages that explore the fact that many of us are adding these same neonicotinoid poisons present in GMO crops to our own yards through the application of weed and bug killing plant sprays in an effort to grow weed free lawns and perfect flowers. These chemicals can affect the nervous systems of organisms including beneficial insects such as bees and butterflies in our own neighborhoods. The run off from chemically treated yards and farms make their way into our drinking water, rivers and lakes. Pesticides are proving to be detrimental to the health of humans, animals and ecosystems. We are seeing more and more the effects of the build up of these poisons in our bodies and the earth.

My goal as an artist is to create beautiful images for a viewer to enjoy. I hope that my works seduce the viewer into looking closely at the image I have created. My hope is that they look closely enough to recognize the underlying meaning: that life is interconnected and fragile. Our bodies should be valued and protected; the natural world, which our bodies are a part of, should be valued and protected. There are a beautiful and a dark side to what is hidden; disease and illness can affect us all. I aspire to remind the viewer to take a closer look at what is around them and value the beauty in the natural world. If the work resonates with the viewer, perhaps they will think more deeply about harm being done to the environment and, of course, themselves by their daily actions. 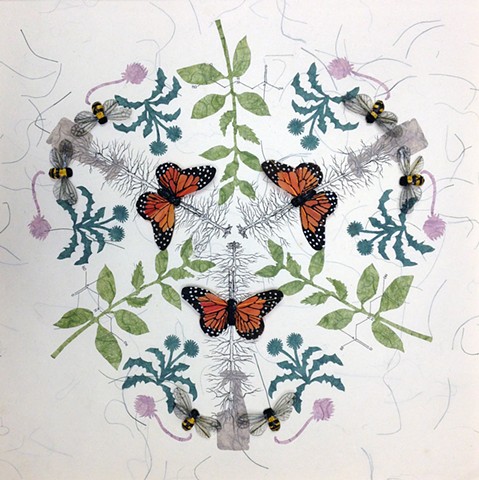